“Representative Romanchuk has a distinguished record in the Ohio Legislature. During that time, he has been a staunch supporter of Ohio’s small businesses, maintaining a 95% lifetime voting record with NFIB” said Roger Geiger, vice president/executive director of NFIB in Ohio. “As a fellow member of NFIB, he has consistently reached out to the small-business community because he understands that growing Ohio’s economy begins with the economic engine of the state that has created two out of three new jobs in the past several years. He is truly deserving of this recognition.”

“Senator Jordan also has an impressive record on small business issues in the Ohio General Assembly. During his tenure there, he has been a steady and strong advocate of Ohio’s small businesses, maintaining a 97% lifetime voting record with NFIB,” said Geiger. “His work to curtail the growth of government and keep taxes in check is appreciated by the membership of NFIB in Ohio.” 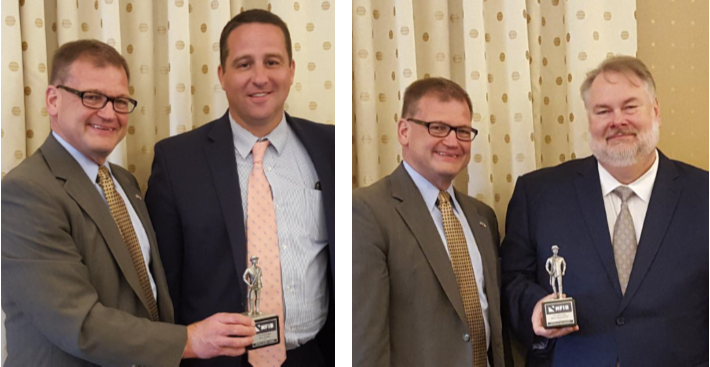 The recognition dates back to 1988 and has been presented to an exclusive list of state legislators in its over 30-year history, with generally one member of the Ohio Senate and one member of the Ohio House of Representatives annually receiving the award. The NFIB Leadership Council for Ohio, which is comprised of NFIB members from across the state, voted to present Representative Romanchuk and Senator Jordan with the Guardian of Small Business Award.

“I am truly honored to receive the NFIB Guardian of Small Business Award.  As a small-business owner and fellow NFIB member, I know the importance of having the voice and perspective of entrepreneurs heard in the Statehouse and across Ohio.  I understand the challenges our businesses face.  I have a record of fighting for small business and will continue to work to ensure Ohio has a climate that fosters job creation,” said Representative Romanchuk.

“It is a privilege to be selected by NFIB to receive their Guardian of Small Business Award.  I have spent my legislative career working to reduce regulatory restrictions and taxes to help encourage an environment that allows our small businesses, the leading job creators, to thrive.  I look forward to continuing my efforts and working with NFIB to ensure Ohio is the best state to own, operate, and grow a business,” said Senator Jordan.