The first to take Gov. Jay Inslee up on his invitation to start the conversation on his climate plan, NFIB is leading the charge against having it contain higher fuel prices that would hit small business the hardest.
On February 16, NFIB/Washington State Director Patrick Connor testified in favor of passing House Bill 1881, which would require express legislative authorization prior to the enactment of any regulation regarding the carbon content of fuel. Click the video below to listen to his testimony, which begins at 29:47 into the hearing.
NFIB was the first business group to produce a study on the impact on jobs, the first to commission two polls on the governor’s climate proposals, the first to produce two radio ads, and the first to produce two web ads aimed at getting the small-business voice heard on any climate law coming from the governor’s office, Legislature, or Department of Ecology.
We need your help. Join the fight. Call Gov. Jay Inslee Today! 360-902-4111. Tell him to keep his pledge not to raise taxes.
Arm yourself with the important information and then call the governor at the number above. Below are five news releases NFIB has issued where you’ll find the study, polls and radio ads. Below them are samples of media hits NFIB has already received on its campaign against a carbon tax. And below them are NFIB members David Degon and Frank Riordan talking about higher fuel taxes for the web ads.
This web story will be updated regularly to include the very latest information.
News Releases
Farmers Join Fight Against Inslee Energy Tax

Governor Speeding Up What He Should Go Slow On 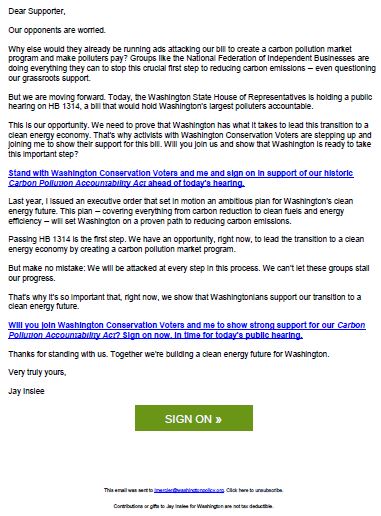 “Groups like the National Federation of Independent Business are doing everything they can to stop [us].”

Apparently, NFIB’s anti-carbon-tax campaign has registered with Gov. Jay Inslee in a big way. Click the image above to read a letter he sent to supporters of a higher fuel tax that singles out NFIB.