Keeping small-business owners up to date on state legislation affecting their enterprises is one of the greater benefits of membership in NFIB, and by the measurement of that goal, NFIB New Mexico’s 2022 Small Business Day delivered.

The Legislature is just two weeks into its 2022 session, and small businesses are already in lawmakers’ crosshairs. Speaking like the small-business owner she is, Rep. Rebecca Dow, Small Business Day’s keynote speaker, said, “Burdensome mandates are at the top of my list of concerns.”

Dow and her husband own a technology company in Truth or Consequences, where they gained a first-hand experience about the difficulties in running an enterprise in New Mexico, and a wish common to small-business owners everywhere to have a steady regulatory environment for enterprises to thrive in.

Dow discussed the minimum wage, more paid leave, and the money the state still has for small businesses, but when asked by an NFIB member when the public health order should end, she became more passionate.

“Yesterday,” was her answer. Wondering what the legislators who passed the 1973 bill establishing the order would think of it being used for a third year “to control every aspect of our lives, our homes, our personal bodies, how we raise our children, what operations we can and cannot have as a small business, and they look at the disparity at what was being done to small businesses [while] corporations around the corner, big box stores, were allowed to operate.”

She said the American Dream is at risk. “We know enough about COVID to make the right decisions for ourselves and our communities. Local decision making is where it’s at.”

NFIB New Mexico State Director Jason Espinoza followed Dow with a rundown of bills NFIB was concentrating on, including getting some changes less onerous to small business in the paid sick leave law scheduled to take effect in July.

Getting some amendments into Senate Bill 7 was another small-business priority. The measure calls for raising the minimum wage to $15 an hour for state and higher education employees, but, Espinoza warned, the measure was written loosely enough to ensnare small businesses doing business with the state. Another worry is Senate Bill 109, which Espinoza’s called “a trial lawyer’s dream.”

Click the arrow on the graphic below to watch the 33-minute virtual Small Business Day and once again when transferred to the video page. Feel free to share it with your friends and family. 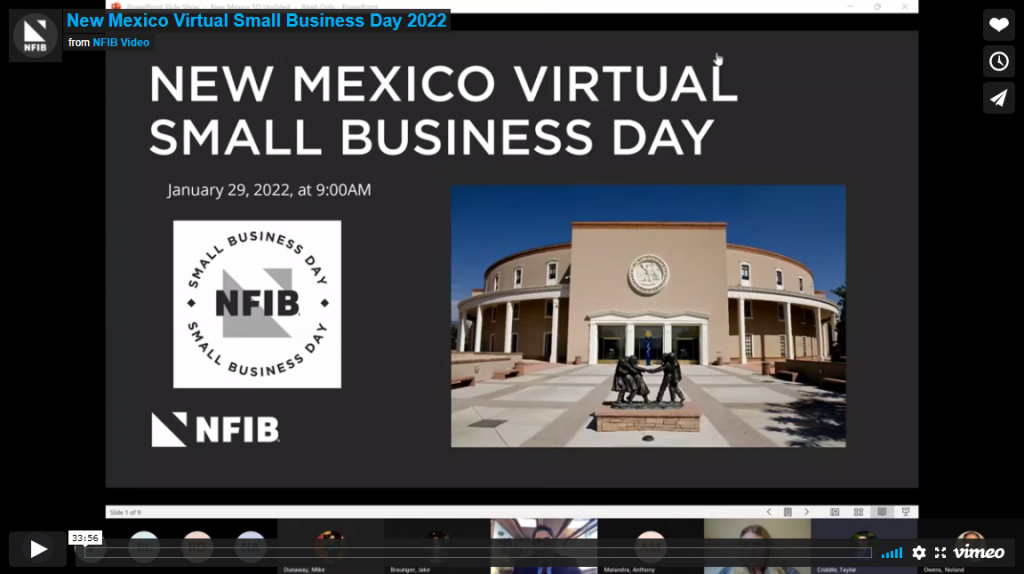