Ever Thought of Running for Office?

The official kickoff for candidate filing started January 9 and will continue through the close of business March 10. The Montana Secretary of State is posting legislative and state candidate filings on its web site, which is updated on a regular basis, so be sure to take the time to find out who is running in your House and Senate districts.
Since boundaries have changed with redistricting, if you’re not sure which district you live in, use the Montana Prosperity legislator look-up tool.
We Need More Elected Small-Business Owners
Every major poll shows small-business owners the most highly regarded group in America, and every elected official claims to be your friend. So how come this doesn’t translate into better legislation and laws for Main Street enterprises?
Because out of sight is out of mind.
During the cut and thrust of legislative activity, even lawmakers who should know better can fall victim to the persuasion of the supremely well-funded lobbying machines of trial lawyers, big labor, and advocates for bigger and bigger government.
It will forever be the mission of NFIB to remind legislators that small businesses aren’t smaller versions of bigger businesses. They have uniquely different difficulties in remaining solvent.
Who better, then, to have writing Montana’s laws than small-business owners who know firsthand the difficulties in keeping people employed and the lights on.
You Start With a Big Advantage
The political clout of small business is more influential than most people know:
Want to talk to someone before making a decision? Give NFIB/Montana State Director Riley Johnson a call to discuss at 406-443-3797.
Related Content: Small Business News | Montana

Every major poll shows small-business owners the most highly regarded group in America.” 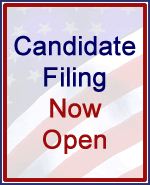 Click the graphic above to go right to the candidate filing page.