NFIB in the News

U.S.
Representative Tim Walberg wrote an op-ed about the Obama Administration’s
regulatory onslaught that was published by The Detroit News. Representative
Walberg cited NFIB member Ralph Beebe’s testimony on the effects of regulations
on his small business in front of the House Education and the Workforce
Committee. Beebe mentioned NFIB’s monthly SBET survey, which finds that
government regulations and red tape have been among the top-three concerns for
small business owners since 2009.  Representative Walberg also said that
due to duplicative and complex reporting requirements, Beebe’s company had to
hire a compliance officer to keep up with the pace of runaway regulations, which takes time away from day-to-day
business operations.  Beebe told the Congressman that he would much rather
hire a welder to work at his engineering company than a compliance
officer.

The Employment
Law Daily reported on last week’s testimony at the Congressional House
Education and the Workforce hearing from NFIB member Ralph Beebe on the effect
of regulations on his Michigan small business. Beebe told the committee:

“The current
state of government regulation has become a confusing and unpredictable
challenge for the vast majority of small business owners,” Beebe observed. “Government
regulation should not hinder the ability of small business owners to create or
expand their businesses. The current pace of new regulation, combined with the
existing regulatory burden, can dictate the business decisions an owner must
make, whether it means utilizing a regulatory compliance officer, attempting to
expand its business operations, or hiring new, full-time employees for the
business’ primary function.”

Michigan must avoid “by invitation only” economic development, By Charlie Owens / Detroit News

In an Opinion blog in the Detroit News, NFIB State Director Charlie Owens warns state lawmakers to avoid slipping back into the targeted tax – corporate welfare policies of the previous Granholm administration. The article was prompted by the Michigan Legislature’s move to give away taxpayer money to lure a Nevada company to build a data center in West Michigan. Owens observed that:

A Union Fight For More Members, Not A $15 Minimum Wage , By F. Vincent Vernuccio / Forbes

In an article published in Forbes, author F. Vincent Vernuccio lays out the real motivation behind big labor’s claims to help the working poor by advocating for a higher minimum wage. Not surprisingly, big labor has no shame in exploiting low skilled workers to bolster its own bottom line. NFIB State Director Charlie Owens was quoted in the article with reference to the NLRB action on franchise businesses that would also help the union force small business employees into a union without a free election:

“The danger of NLRB’s action was made clear by Charlie Owens, the Michigan state director of the National Federation of Independent Business, in a statement issued after that state’s Senate approved its push-back bills. According to Owens, the NLRB would ‘make a franchisor responsible for a franchisee’s employees even in areas where they do not exercise direct control over employees of the franchisee,’ with the intention of making it ‘easier for big labor unions to strike and organize franchise business employees and small independent businesses.’” 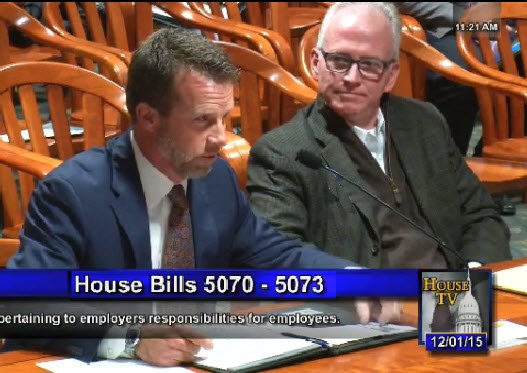 To make the process of end running the Constitutional authority of Congress even smoother, federal agencies have taken it to the next level by ignoring their own rule making process, according to the NFIB Small Business Legal Center. In his Detroit News opinion blog, NFIB State Director Charlie Owens observes that:

“The ‘stealth Congress’ is a legion of unelected, unaccountable federal bureaucrats protected by civil service and, in many cases, a collective bargaining agreement as well. In Washington, that has been the way to get things done for a President that cannot move an agenda through the Congress.”

While the Clean Air Act gives the EPA authority over existing power plants. It doesn’t give them the power to determine the future structure of our power grid. That power belongs to the people via their elected representatives in Congress, opined NFIB State Director Charlie Owens:

“There is practically no way that a coal-fired power plant can meet the EPA’s unrealistic new standards.  Everyone in Michigan will take a big hit when half of our electric generation has to be replaced in the next few decades. On top of that, Michigan consumers are especially vulnerable to electric rate increases because of their home heating needs. The impact will also be felt in consumer spending and job creation (or lack thereof).”

Getting on top of the red tape rampage, By Charlie Owens / Detroit News

In an Opinion blog in the Detroit News, NFIB State Director Charlie Owens pointed to two changes in the law moving through the state legislature that would help small business get on top of the regulation rampage:

“The term “regulatory reform” doesn’t sound very exciting and often the pace of progress in reform efforts can seem glacial compared to the volume of new rules that seem to emanate from every pore of government. Yet, there is significant progress being made in Michigan with two changes that will impact existing and future state rules and regulations.”

Labor Day for the rest of us, By Charlie Owens / Detroit News

While the holiday was created to recognize the labor movement, membership in labor unions has continued to decline over the years. In this Detroit News opinion article, NFIB State Director Charlie Owens observes that:

“Despite attempts by the Obama government to resuscitate the big labor union model via the DOL and NLRB (National Labor Relations Board) and other agencies temporarily under its influence, union membership has plummeted over the years.”