Can Nevada’s Economic Reviews Get Any Worse?

“Right now, if Nevada were playing the ballroom at a huge hotel and casino, its reviews would have ended its run in record time,” said Randi Thompson, Nevada state director for the National Federation of Independent Business (NFIB), the nation’s largest and leading small-business association, which produces the monthly Optimism Index. The index is a national snapshot not broken down by state.

“A recent report from the Nevada State Bank found 45% of Nevadans saying the state is on the wrong track, and another survey found more Nevadans pessimistic about their financial security. And now, in rapid succession, comes our survey showing record low levels and record high readings in components that should be the reverse. We don’t have a legislative session until next year, but it’s campaign season, and I highly encourage lawmakers and want-to-be lawmakers to keenly listen to the concerns of the people they want to represent. The economic repair of our state has to start now.”

Key findings from today’s Index include:

“Inflation has impacted small businesses throughout the country and is now their most important business problem. With inflation, an ongoing staffing shortage, and supply chain disruptions, small business owners remain pessimistic about their future business conditions.”

Keep up with the latest Nevada small-business news at www.nfib.com/nevada, where this news release can also be found, or by following NFIB on Twitter @NFIB_NV.

For 78 years, NFIB has been advocating on behalf of America’s small and independent business owners, both in Washington, D.C., and in all 50 state capitals. NFIB is a nonprofit, nonpartisan, and member-driven association. Since our founding in 1943, NFIB has been exclusively dedicated to small and independent businesses and remains so today. For more information, please visit nfib.com. 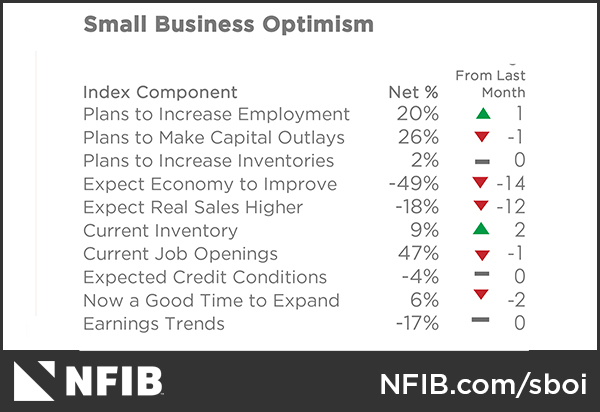