What didn't pass more important for small businesses than what did

On August 11 the Oregon Legislature commenced, and then adjourned sin die the second special session of 2020. The one-day session was primarily focused on rebalancing the state budget, but it also included some policy bills relating to the Employment Department. A total of 12 bills were passed and are now on their way to the desk of Gov. Kate Brown.

More importantly for small businesses, it’s what didn’t pass that we’ll be focusing on in this quick update:

Disconnection from the CARES Act: LC 2

On August 6, just a few days before the start of the second special session, the House Revenue Committee met to receive invited testimony from the Legislative Revenue Office (LRO) regarding Legislative Concept 2.

LC 2 would have disconnected Oregon from three parts of the CARES Act:

Passed in a bipartisan congressional vote, the combined effect of these key features of the CARES Act allows for the immediate monetization of business losses, rather than having to carry losses forward to future tax years, and allows for an increased deduction for interest paid, recognizing that many businesses are having to borrow in order to ride out the pandemic. The primary purpose of these provisions is to address liquidity in a time when most businesses are experiencing challenging cashflow issues.

If LC 2 had become law, the state would have denied much-needed tax relief to thousands of Oregon businesses totaling $225 million in the 2019-20 biennium and over $100 million for the 2021-22 biennium. By the 2023-24 biennium, this policy change would negatively impact the state budget. The state would have been shortsightedly prioritizing its own immediate budget needs over the cashflow needs of Oregon businesses – and the jobs that those businesses provide to working Oregonians.

Fortunately, NFIB and our allies sprang into action, flooding the Capitol with emails to the Revenue Committee, the governor’s office, and individual legislators. When the Legislature published its final list of bills for consideration during the one-day session, LC 2 was not on the list! This is a great win for us, but keep in mind the fact that every win is temporary at best – we’ll need to stay vigilant as there is already talk of another special session in September.

During the first special session, back in June, NFIB and our allies made a push for coronavirus-related liability protections for businesses that were operating in good faith to protect their employees and customers from the virus by following state-issued public health and safety rules.

Ultimately, we were unsuccessful at getting a liability amendment added into the coronavirus omnibus bill but received a commitment from legislative leadership that the issue would be sent to a workgroup for consideration during the second special session.

Frustratingly, the workgroup was unable to reach consensus in time for a bill to be drafted for the second special session. That work continues, and we remain hopeful that liability protections will be on the table when/if the legislature meets in September for a third special session, so stay tuned. This fight is far from over.

One of the bills that passed during the special session was Senate Bill 1701. This is an interesting piece of legislation that was brought forward by BOLI Commissioner Val Hoyle with the support of the Oregon Restaurant and Lodging Association.

The bill increases to the total amount of wages that an employee can earn per week before their unemployment benefits are reduced. It was modeled after an executive order issued by Georgia Gov. Brian Kemp.

Basically, an employee receiving unemployment benefits will now be allowed to earn up to $300 per week in wages before their benefits are reduced. The previous limit was $132.50 (10 times the highest minimum wage rate in the state) and reverts back to this limit once this bill sunsets at the next of next year.

The thinking behind this bill was that businesses, especially those with part-time workers, are having a difficult time getting their employees to come back to work because even working a few shifts per week (which is all the employer may be able to offer) could result in a drastic reduction in UI benefits for the worker.

The concept received strong bipartisan support, but several Republican legislators voted “NO” on final passage because they were concerned about saddling the Employment Department with additional coding work. We’ll be keeping a close eye on this one. 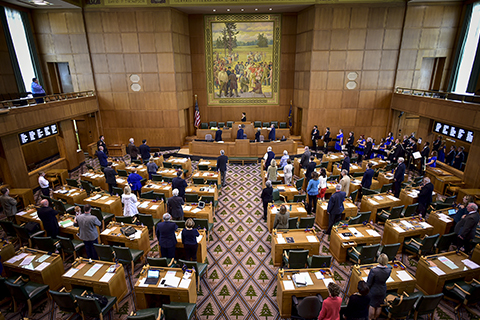