DENVER, June 8, 2021—Small-business optimism hit a bump in the road in May, according to today’s release of the National Federation of Independent Business’ Small Business Economic Trends report, also known as the Optimism Index.

“May saw a slight pause in the recovery of small business optimism after steadily increasing each month in 2021,” said a national news release issued by NFIB. “As reported in NFIB’s monthly jobs report, a record-high 48% of owners reported unfilled job openings.”

Commenting locally, Tony Gagliardi, NFIB’s Colorado state director, said, “Colorado small-business owners are doing their best to get opened and get their employees back to work. Fortunately, a bad policy such as Senate Bill 176, the so-called workers’ rights act, or, as it should more accurately be called, the Sue-Your-Boss bill, was killed in the House Judiciary Committee, yesterday. Now, if Gov. Jared Polis can find it in him to veto House Bill 1232, an attempt to turn the office of the Insurance Commissioner into the office of Colorado Insurance Czar, it would send a strong message to employers to start hiring again. The cost and availability of health insurance have been small businesses’ No. 1 problem for 30 consecutive years, and HB 1232 does nothing to alleviate that.”

Other key findings include: 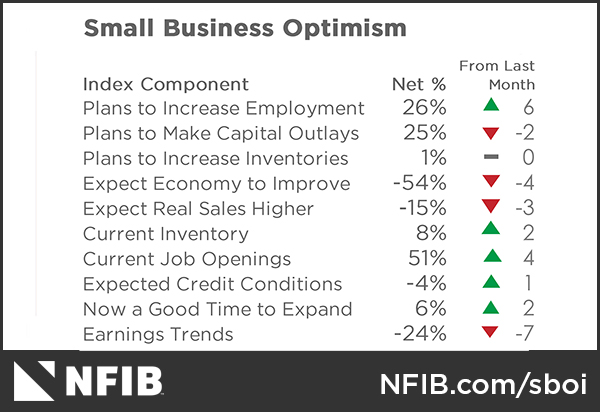