DENVER, Dec. 14, 2021—Not for 42 years has one component of NFIB’s Small Business Economic Trends (SBET) report, released today, seen such an increase. The net percentage of NFIB’s small-business-owning membership that reported raising selling prices jumped six points to a net 59%–the highest reading since October 1979.

Other key findings include:

“As the end of the year nears, the outlook for business conditions is not encouraging to small business owners as lawmakers propose additional mandates and tax increases,” said NFIB Chief Economist Bill Dunkelberg. “Owners are also pessimistic as many continue managing challenges like rampant inflation and supply chain disruptions that are impacting their businesses right now.”

Here in Colorado, Tony Gagliardi, NFIB’s state director, said, “Small business owners are hoping for a glimmer of hope waiting for the Legislature to come into session in January. The Legislature will be asked to adopt Governor Polis’s plan for shoring up the Unemployment Trust Fund. This can be easily done by moving $500 million from the General Fund and adding an additional $100 million in funds received by Colorado under the American Recovery Plan Act. Currently the fund has a $1billion dollar deficit.”

Released on the second Tuesday of every month, the NFIB Research Foundation has collected Small Business Economic Trends data with quarterly surveys since 1974 and monthly surveys since 1986. Survey respondents are drawn from NFIB’s membership. Today’s survey was conducted in November. 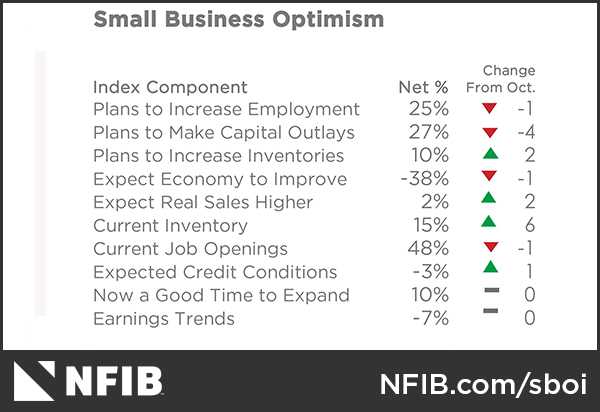