“Records are meant to be broken but on the positive side of things. Not so with this newest Jobs Report,” said Tony Gagliardi, NFIB’s Colorado state director, in reference to the record 49% of small-business owners reporting unfilled job openings. “Unfilled job openings have remained far above the 48-year historical average of 22 percent.

“With the September 6 end in sight of the extra $300 dollars the federal government has been adding to state unemployment benefits, maybe some workers will find it necessary to return to the job site. Thirty-eight percent of employers have already increased their salaries in attempts to attract new job seekers.

“In addition to the inability to fill current job openings, and also occurring September 6, Colorado employers will take a blow to the stomach when the state must begin paying 2.27 percent interest on the unpaid balance of a $1 billion loan it took out from the federal government to shore up the state’s unemployment trust fund. This puts small-business owners in the unavoidable crosshairs of having to pay higher UI taxes—something that could have been softened if Gov. Jared Polis had allocated funds recently received from the federal government to reduce some of the deficit.”

Small business owners struggled to find qualified workers for their open positions, which has impaired business activity in the busy summer months. Owners are raising compensation to the highest levels in 48 years to attract needed employees.”

Highlights from the Jobs Report

NFIB’s Jobs Report is a national snapshot not broken down by state. Today’s results were based on 1,440 respondents to the July survey of a random sample of NFIB’s member firms, surveyed through 7/30/2021. The NFIB Research Foundation has collected Small Business Economic Trends data with quarterly surveys since 1974 and monthly surveys since 1986. 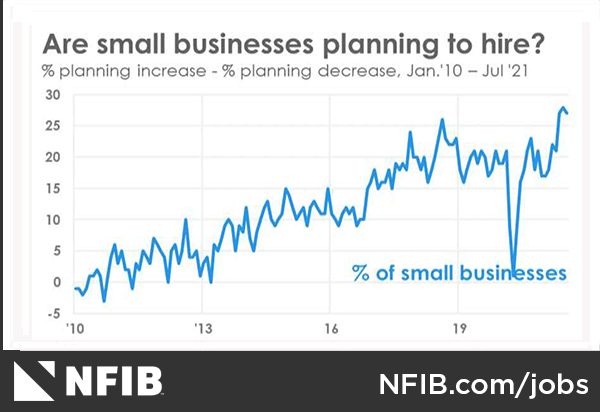