SACRAMENTO, Calif., Aug. 13, 2020—As it has done every four years since 1982, the nation’s voice of small business today released the latest edition of its Small Business Problems & Priorities report, ranking in order of importance 75 issues of concern to Main Street, mom-and-pop enterprises.

For only the second time in the report’s history (2016 the other), four states were segmented for closer review, California, New York, Ohio, and Texas. The California component of the report begins on Page 82 and runs to Page 87.

“It might be too late for the current session of the California Legislature to consider, but I believe Table 15 on Page 86 would be an excellent starting point for a serious discussion on creating the right public policy for California,” said John Kabateck, California state director for NFIB, which published the report. “In that table are 20 of the 75 issues where California differs substantially from the U.S. rank. Not all of them are bad, but there are some hugely serious ones that need addressing.”

According to the Foreword in the report, “The list includes two basic types of problems: those heavily influenced by government including various types of taxes and regulations, and problems more associated with the operations side of the business including owners’ ability to manage their time and keeping up with market trends. The combination provides broad context and allows observers and analysts a better understanding of the relative importance of problems affecting small-business owners that are internally and externally generated.”

According to NFIB’s Research Center, “the data were collected just prior to the COVID-19 health and economic crisis began in mid-March. The data reflects owners’ views four years into one of the longest U.S. economic expansions. The health and economic crisis that ended economic growth in March will have certainly impacted some of these results, especially those related to employment, sales, and financing … However, many top concerns among small-business owners remain constant problems irrespective of economic conditions.”

Click here to read NFIB’s national news release on the Small Business Problems & Priorities report.
Keep up with the latest on California small-business at www.nfib.com/california or by following NFIB on Twitter @NFIB_CA or on Facebook @NFIB.CA. 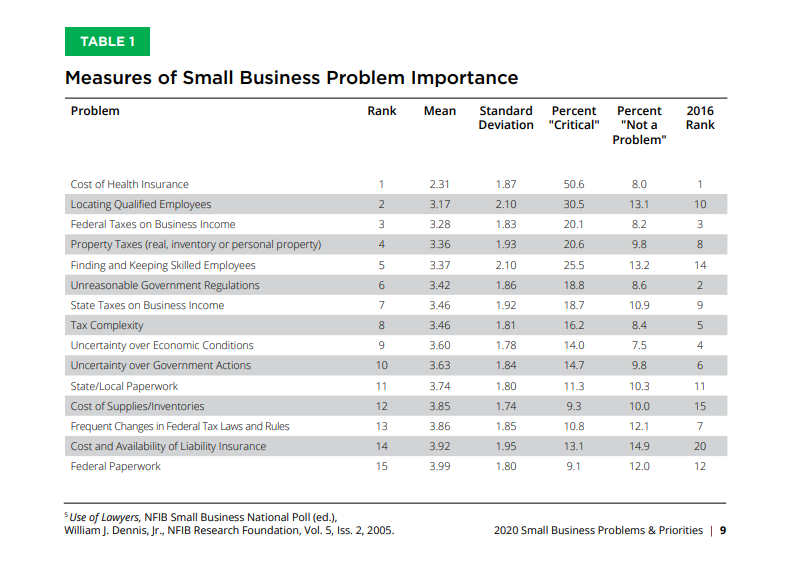