NFIB thanks Arizona’s top law-enforcement official and an ABC 15 reporter for exposing and stopping assaults on small businesses.

“Bravo! Arizona Attorney General Mark Brnovich and your entire office for intervening to stop the swarm of exploitive lawsuits (1,500 since February!),” complimented NFIB/Arizona State Director Farrell Quinlan. “And thank you Dave Biscobing and your ABC15 crew for shining a light on this important story. Arizonans with disabilities are ill-served by drive-by lawsuits resulting in shakedown windfalls for drive-by lawyers.”
The Audacity Astounds
A firm calling itself Advocates for Individuals With Disabilities (AID) had been searching Maricopa County parking lots for violations of the American With Disabilities Act (ADA) and then recruiting individuals to sue small-business owners, including dozens of NFIB members, in hopes of getting a quick settlement.
“Multiple news sources reported many lawsuit threats coming from AID and its lawyer, Peter Strojnik, have resulted in settlements of around $5,000,” reported the Phoenix Business Journal.
Dave Biscobing of ABC15 News in Phoenix, who has done the most of any journalist to bring the story to light, found one such plaintiff recruited by AID, making a tidy income from lending his name to 530 of the lawsuits. David Ritzenthaler, who, according to Biscobing gets $100 a case from AID potentially hauled in more the $50,000.
Biscobing and his camera crew, by the way, also filmed Ritzenthaler getting around quite well without the use of his cane. All of Biscobing’s reports can be found in one location on the ABC15 website.
Enough
On August 24, Attorney General Mark Brnovich moved in to stop AID, calling it a serial litigator. “Plaintiff is circumventing the statutorily proscribed State enforcement process by claiming to ‘investigate’ supposed violations of the federal Americans with Disabilities Act and the AZDA, while in reality apparently engaging in ‘trolling’ litigation tactics designed to induce defendants into quick pre-suit or post-complaint settlement that merely enriches the Plaintiff.”
On August 30, Brnovich took an additional step when he filed a motion in Maricopa County Superior Court asking to consolidate 1,289 open lawsuits targeting Arizona small businesses. According to a department news release, “His motion asked the judge to consolidate the cases … for the following limited purposes:
“If the judge agrees to allow the State to intervene as a limited purpose defendant, the State intends to file a motion seeking dismissal of all consolidated cases.”
Not the First Time
The rash of ADA lawsuits this year is only the most recent of such actions, reported The Arizona Republic’s Maria Polletta.
“Last year, a woman filed more than 150 suits against Arizona hotels lacking pool lifts, which help guests with disabilities get into swimming pools. And Phoenix attorney Lindsay Leavitt, who has defended about 175 businesses in ADA-compliance cases, said he has seen more than 200 suits regarding bar and restaurant interiors since October.
” ‘I think all of us would agree: The ADA is a great, well-intentioned law,’ Leavitt said. ‘I’m not sure that 1,300 lawsuits filed against small businesses is what (its creators) had in mind.’
“Leavitt said the suits are ‘like shooting fish in a barrel,’ because nearly all businesses choose to settle out of court instead of investing additional time and money into pursuing litigation. He was not aware of any Arizona suits that had gone to trial.
“Possible defendants abound, Leavitt said, because there is no such thing as ‘almost compliant’ — meaning a business that posts one sign an inch below the minimum required height, for instance, is just as vulnerable to a suit as one with more severe accessibility problems.”
Indeed. One small-business owner interviewed by Biscobing quoted him as noting that AID wanted $5,000 for what is essentially a $50 sign.
Not Happy
Legitimate organizations helping those with disabilities are none too happy with what has been going on, either. “People with disabilities don’t want more lawsuits,” Phil Pangrazio, executive director of Ability 360, told ABC15 News. “We do feel that type of high-frequency lawsuit filing is giving the ADA a bad name,”
Double-Check Compliance
NFIB’s Quinlan urged members and other small-business owners to acquaint themselves with the basic rules of handicapped parking compliance at this webpage published by the ADA National Network.
Related Content: Small Business News | Arizona | Legal | Phoenix, AZ 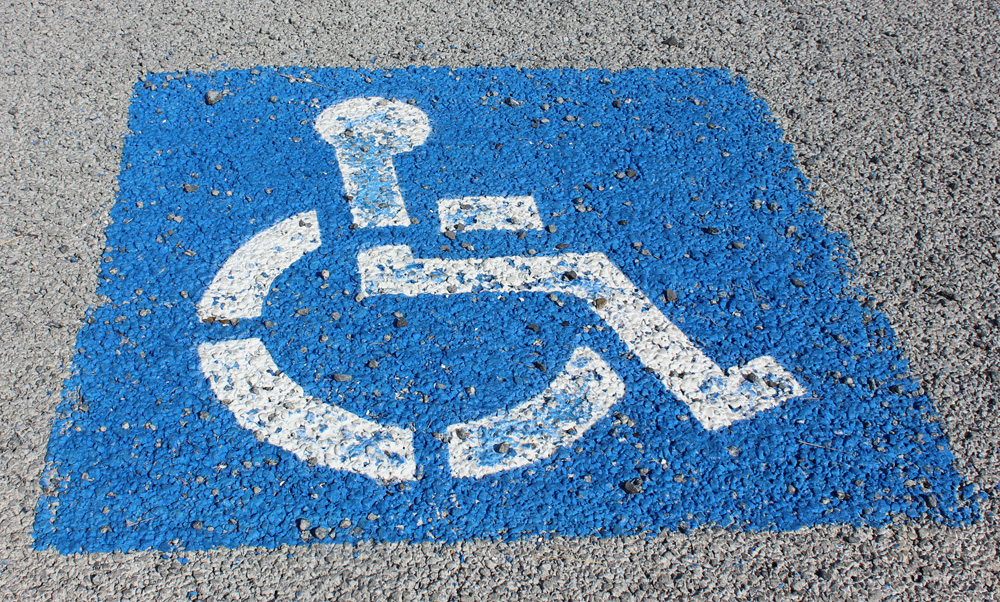 Click the photo above to check on your compliance.

“Possible defendants abound, Leavitt said, because there is no such thing as ‘almost compliant’ — meaning a business that posts one sign an inch below the minimum required height, for instance, is just as vulnerable to a suit as one with more severe accessibility problems.”