Another record high in job openings is not a welcomed statistic

The National Federation of Independent Business releases its Jobs Report the first Thursday of every month, and the latest numbers show a record 44% of all small business owners report having job openings they could not fill, 22 points higher than the 48-year historical average, and two points higher than the 42% figure from March. April is the third consecutive month with a record-high reading of unfilled job openings among small businesses. The poll is a national sample not broken down by state.

“While small businesses are glad to see Gov. Doug Ducey re-instating the active work search requirement to qualify for continued state unemployment benefits, more work needs to be done to get able workers off the unemployment rolls and back into one of the many available jobs in the private sector,” said Chad Heinrich, NFIB’s Arizona state director. “With April also setting a new 12-month high in small businesses raising wages, and a full one-fifth of additional owners planning future wage increases, hopefully the private sector will soon be able to compete with the overwhelming price the federal government is paying able-workers to sit on the sidelines.”

“The tight labor market is the biggest concern for small businesses who are competing with various factors such as supplemental unemployment benefits, childcare and in-person school restrictions, and the virus. Many small business owners who are trying to hire are finding themselves unsuccessful and are having to delay the hiring or offer higher wages. Some owners are offering ‘show up’ bonuses for workers who agree to take the job and actually show up for work.”

The NFIB Research Foundation has collected Small Business Economic Trends data with quarterly surveys since 1974 and monthly surveys since 1986. Survey respondents are drawn from NFIB’s membership. The survey was conducted in April 2021 and reflects a random sample of 10,000 small-business owners/members. 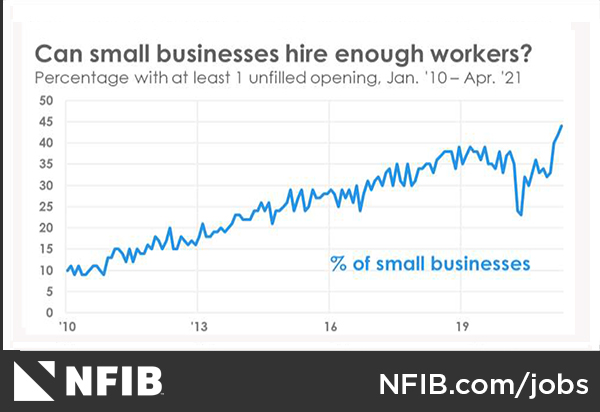